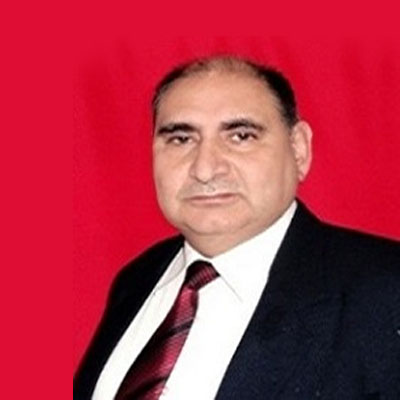 Dr. Pushpati Nath Razdan was born at Srinagar on 25th Dec. 1948. He got his M. Sc degree from University of Kashmir in 1971 and PhD degree from University of Roorkee in 1975. He was appointed as Assistant Professor at H.P. Agriculture University Solan. Dr. Razdan joined Geological Survey of India in 1983. He was appointed as Dy. Director General (Geochemistry) in Feb.2005 and Sr. Dy. Director General in Feb 2008. As Deputy Director General and HOD NR, GSI, Ministry of Mines, GOI, for more than three years, he looked after all the geoscientific activities of Northern.

Dr. Razdan joined All India Council for Technical Education, AICTE as Adviser-I in April 2001 and served up to Feb. 2005. He looked after various Bureaus, before joining as Advisor Quality Assurance (QA) and Member Secretary (NBA) in July 2002. As Member Secretary of NBA, he was responsible for creating awareness of accreditation throughout the country. His contribution to NBA by becoming member of Washington accord/ INQQHAE / Asian Accord has been widely appreciated. Application for membership of Washington accord was submitted by Dr. Razdan at New Zealand in 2004. He was the main architect for initial drafting of Regulations for "Entry & Operation of Foreign University /Institutions intending/intend to impart Technical Education in India. He was a member of several committees constituted by MHRD/UGC on different issues concerning higher & technical education.

Dr. P. N. Razdan has published many research papers in various Journals of International repute. He was visiting faculty at Allahabad University and is also guest faculty at GSI Training Institute. He was awarded H. K. Sen. Memorial Medal in 2006 by Institution of Chemist. He was nominated as member of “High Power Committee on GSI” constituted by GOI. Ministry of Human Resource had appointed him as chairman of a Review Committee for evaluating the Ministry’s Schemes of Sub-Mission on Polytechnics.

Dr. Razdan was Pro Vice Chancellor of KIIT University Bhubaneswar for about 2 Years, wherein he was overall responsible for various activities in seven independent Schools of Engineering. Dr P. N. Razdan joined Dr. D. Y. Patil Vidyapeeth Pune as Vice-Chancellor in 2010 and relinquished his assignment on 31th Dec 2018. He was responsible for leading, directing, and managing day-to-day academic and administrative operations of DPU along with providing strategic planning and leadership to the Vidyapeeth.

Dr Pushpati Nath Razdan has joined Gokula Education Foundation, Bangalore as Principal Advisor, Quality Assurance and Excellence cell in January 2019 to look after total quality management of the institutions for national and international visibility, through accreditation, rating and ranking.